There are many places in NetSuite that you can add SuiteScript to that can have an effect on performance. In addition to models and service controllers, you could also use scriptable cart, workflows, user events, and customized sales orders. It’s important, therefore, that you know the potential performance problems that using SuiteScript can introduce, and how to avoid them.

Ecommerce applications built on the NetSuite platform can run fast and perform reliably, as long as you use the platform within its capabilities and follow best practices. The following information is intended to help you identify permissible designs that ensure the scalability and robustness of your customizations.

An important thing to remember is that it is OK to sometimes make a decision that will be at a cost of performance, so long as you are aware of that cost. Once you know that price you can prioritize, and weigh the cost against the benefits of each of your customizations.

In general, the keys to great performance are:

Which SuiteScripts are the Most Likely Cause of Poor Web Store Performance?

If you're experiencing slowness, tracking down where it's coming from can sometimes be tricky. In my experience, the following script types are the best places to start:

When analyzing the situation, you should also think about what step in the process the slowness is occurring because different types of customizations can affect different areas. The table below summarizes the possibilities:

What you can see above is that if you enable scriptable cart, it will trigger on most pages throughout a shopper's journey. Any scripts in SS/SSP files are often triggered on touchpoints, and Suitelet/RESTlet scripts can also be triggered on the web store context.

Customer records and user event scripts can be triggered when the shopper logs in, or registers a new account.

Finally, the moment the user submits an order, sales order user events scripts and workflows will trigger, which can be particularly problematic.

What are the Indicators of Slowness?

It is your responsibility to ensure that the SuiteApps and scripts you deploy into a NetSuite instance (whether yours or a customer's) have efficient and performant code.

The short answer the above question is that the script is taking a long time to run but not failing, manifesting in web page latency.

If the script is taking a long time to run, then it's probably doing one or more of the following:

So, once you've identified a possible cause for your performance issues, what can you do about it?

Broadly speaking, there are five areas you can make changes to:

You can first check to see how your script is running and make decisions about whether you've configured it correctly.

Prevent the Script from Running in the Web Store Context

If the script is only required when orders are being placed in the backend (ie by staff members), then you can disable it from running on the frontend.

On the deployment page for the script, it is common for all roles in the Audience > Roles multiselect to be selected. If you uncheck the Select All checkbox and, instead, select only All Employees, this will prevent the script from running on the frontend. 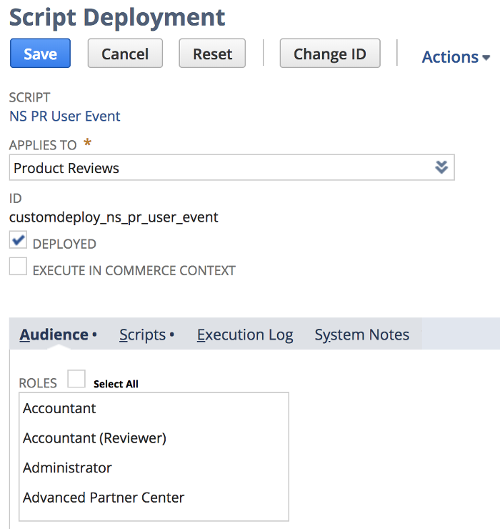 For user event scripts, there is another option you can use: the Execute in Commerce Context checkbox. When checked, the script will execute on SuiteCommerce, SuiteCommerce Advanced and SuiteCommerce InStore sites; when unchecked, it won't. Again, if your script isn't needed on the frontend, consider preventing the script from running in that context.

Prevent a Workflow from Running in the Web Store Context

For similar reasons as above, you can also prevent a workflow from triggering in events that happen on the frontend.

In the Contexts multi-select, de-select the Web Store option.

Specify the Event Type on the Deployment Record

The Event Type dropdown appears on Suitelet, user event, and record-level client script deployment pages. You can use it to specify the script's execution context at the time of deployment. Once you specify the event time, the deployed script will only execute on that event, regardless of what's specified in he script.

It's important that you remember that whatever you select in the UI will take precedence over what's specified in the file. For example, if you've specified the Create type in the script, selecting Delete in the UI will restrict the script from running in any event other than the Delete one.

When developing SuiteScript, it is important that you use only supported and documented APIs, methods and objects (ie the ones documented in the help center). Keep in mind, too, that DOM references in SuiteScript are not supported.

Refer to our API maps to see how the two compare:

Branch Scripts Depending on the Metadata or Context of Execution

This means that your scripts first check where it is being accessed from before running; or, to put it another way, run different code depending on whether it is run from web store or the backed UI.

Create a branch at the onset of the function call, and then determine the succeeding logic per script context — this is particularly important for client scripts executing via scriptable cart or in the checkout.

Use Setter and Getter Methods

It is often better to use the built-in getter/setter methods than to manually try to get/set these values.

In SuiteScript 1.0, use cached variables as applicable. This eliminates calling the same function/method which will return the same response on a single instance of script execution.

In 2.0, the cache API enables you to load data into a cache and make it available to one or more scripts. This feature reduces the amount of time required to retrieve data.

Load the cache module to enable temporary, short-term storage of data, which is stored according to its specified time to live (TTL). The cache module is supported by all server-side script types, and can improve performance by eliminating the need for scripts in your account to retrieve the same piece of data more than a single time.

Be Mindful of nlapiSearchRecord's Limitation of 1000 Rows

SuiteScript 2.0 has a search pagination API that enables you to page through search results, which improves performance and gives you an intuitive way to efficiently traverse search result data.

Let's say, for example, that you have four separate scripts that have similar logic of comparing old and new record data, or it needs to iterate through a sublist with separate nlapiGetOldRecord, nlapiGetNewRecord, nlapiLoadRecord calls in each afterSubmit script. Consider consolidating these down to a single script that combines the logic of all four scripts. You will minimize overhead by reducing the number of API calls of individual scripts.

Use Asynchronous Processing via Scheduled Scripts

If your script performs numerous record updates or POST operations after submission, consider moving it to a scheduled script.

In this example, you could have a sales order afterSubmit script that sends an email to a sales rep, creates a custom record for tracking, performs a call to an external site, etc — ask yourself whether this needs to happen immediately after the user has hit submit, or whether it can be performed outside of the process at another time.

Loading and submitting entire records is costly, so if you're just loading/updating a single field (or two) consider using the built-in methods:

Build an array of item records and use that as a filter to execute only one search for all records, instead of performing individual searches for line.

Consolidate Multiple Searches into One Search with a Broader Condition

In other words, reduce the number of calls you make. If your script performs multiple searches for the same record, manipulate the returned search result in each of the different cases, rather than performing the search repeatedly.

After performing a search, do not use nlapiLoadRecord or nlapiLookupField to load the record into memory to retrieve data — it is very inefficient because of the unnecessary number of I/O API calls. Instead, prior to running the search, add the desired columns to the search (and use getValue!)

You must always keep in mind the governance usage limits of executing SuiteScript.

When a script exceeds the governance limits, the system throws a usage limit error, and the script is halted by the platform. The script cannot be resumed at the point of file and, as a result, any processes that depend on that script can be terminated mid-stream. When this happens, you threaten the integrity of your data and any downstream tasks and transactions.

Third-party services can be unreliable, or slow, and any performance problems they have will be transferred to the end user.

Where possible, avoid making these calls (eg via nlapiRequestURL) and, if possible, use inline/global variables instead.

Scheduled scripts have a much higher governance usage limit (10,000 units per script), which gives you a lot more resources to do your processing. You can write your user event scripts and Suitelets so that the 'heavy lifting' (ie high volume I/O calls) is done by a scheduled script.

The caller script can call the scheduled script with nlapiScheduleScript; once it's made the call, the control returns immediately back to the caller script, thereby improving user experience — the user does not need to wait for the logic to finish executing. The invoked scheduled script is then placed in a queue and executed asynchronously.

Just note that nlapiScheduleScript is not currently available within SSP applications, but it can be called within Suitelet, RESTlet, user event, and portlet scripts.

Use a Checker Function to Yield if Necessary (SuiteScript 1.0)

If you do use scheduled scripts, make sure you add a function that checks how much governance units you have left, and then yields if it gets low.

Yielding is a feature of scheduled scripts that creates a recovery point for a scheduled script, and then schedules another time for it to run later. In other words, while it may not finish running all of the I/Os, it will do as many as possible and do the rest later which means, importantly, that the data retains its integrity.

Note that yielding is a built-in feature of SuiteScript 2.0, so this only applies to SuiteScript 1.0.

An example of this script:

The map/reduce script type is designed for scripts that need to handle large amounts of data. It is best suited for situations where the data can be divided into small, independent parts. When the script is executed, a structured framework automatically creates enough jobs to process all of these parts. You as the user do not have to manage this process. Another advantage of map/reduce is that these jobs can work in parallel. You choose the level of parallelism when you deploy the script.

If a map/reduce job violates certain aspects of NetSuite governance, the map/reduce framework automatically causes the job to yield and its work to be rescheduled for later, without disruption to the script. However, be aware that some aspects of map/reduce governance cannot be handled through automatic yielding. For that reason, if you use this script type, you should familiarize yourself with the SuiteScript 2.0 Map/Reduce Governance guidelines.

Since the new Map/Reduce script automatically handles governance usage and yielding, nlapiSetRecoveryPoint and nlapiYieldScript has been deprecated in SS 2.0.

Use as Much Standard Functionality as Possible

Consider whether custom records are necessary: consider, instead, whether it would be better to add a custom field to an existing record. Create new records when you need a new business object that is not aligned with a standard object.

Keep your web store transaction forms lightweight: remove all fields that are not necessary (including standard forms).