When creating a new extension, you would be forgiven for thinking that it could only contain one module. In fact, not only is it possible to add more than one, it can often make more sense that breaking out related functionality into multiple extensions.

I'll cover the details as well as some extra contextual information below, but the gist is this:

If this isn't working out for you, or if you want to know more, read on — I have an example; the code is available on this page, and is also available in GitHub.

In my theoretical example, I'm going to create two simple modules with the following structure:

Where I've substituted ModuleOne for ModuleTwo in the second module.

Finally, in my manifest.json file, I've added the path to ModuleOne.js as the entry point file for each of the application's JavaScript, and then run gulp extension:update-manifest. When that finished, I ran gulp extension:local and visited my site. The question arises: what will we see in the developer console?

Yes, and that's expected behavior. The second module has not loaded, despite having its files appear in the manifest file. Why? Because we haven't called them.

When the extension is loaded, only the entry point file in the manifest file is called. Therefore, if we want extra code to be called, we need to put in calls in that entry point file's mountToApp() method. Whatever we put into there is up to us — including a call to files from other modules. But entry point files are a bit more nuanced than that in extensions.

Now, when I visit the checkout or customer account areas of my local site (after saving the manifest and restarting the server, of course) I can see the following message in the console:

This is perfect for scenarios where you want to run different code in different parts of the site but have it inside the same extension. It also lets you manage dependencies: we don't make every core file available through all applications, and you wouldn't want to get errors in your file because you've referenced a file that the current application doesn't think exist.

Calling Files in Other Modules

So, reseting our manifest file so that all three applications use the same entry point, how do we call files from one module to load at the same time? With dependencies, of course.

If we modify ModuleOne.js and add ModuleTwo as a dependency, we can then call it from within our file. For example, we could call it's mountToApp() method if we wanted to:

And what do we get?

Remember, it doesn't have to be only 'entry point' style files that you call across different modules: just like standard SCA development, you can reference any file (eg views or models) as long as it has been properly defined and made available to the application. In other words, instead of having an entry point file in your second module, you could just have a view, model, or whatever you want, instead. Just add it as a dependency and call one of its methods.

Finally, as a bonus tip, don't forget that if you want to create a folder structure in your top-level assets folder, you can. There is nothing stopping you from dividing your assets folders up like this:

To illustrate this, I've created an example that reuses the view and template files of ModuleOne in ModuleTwo, so that the only thing that is different is that I have duplicated the ModuleOne entry point file and changed its name (and a value in the file that captures its name). The idea is super simple: I want some text and a small image to appear in the header, but I want the text and image to be different depending on which application we're using.

I've reconfigured the manifest file so that ModuleTwo's entry point is loaded when the shopper hits the checkout application.

In the shopping application, I get something like this: And in the checkout application, I have this: 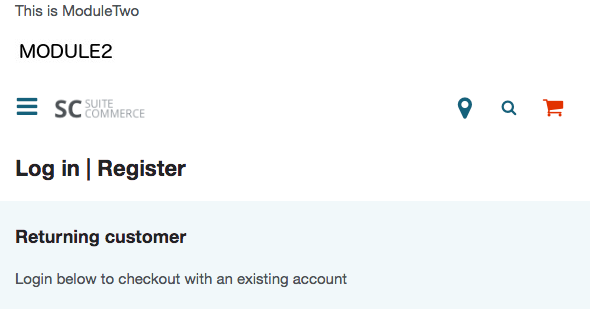 ModuleTwo's looks identical, except for the name in the opening of the define statement and the value of name; ie, it still adds the same view and we dynamically pass the module name to the view constructor.

When the view is created, it is passed whatever options the constructor is given and attaches them to its own options property. In our case, we passed it the name of the module, which I've used to build up the path for the image URL as well as a message to be passed to the template.

The template itself is super simple:

Again, both the view and template are completely reusable in this context, and we could build them out how we wish. If we need to diverge and create a customization that is more particular to the scenario, then we could modify the view and templates with more conditionals, or we could simply go back to having separate files. It's really up to you. But the message, I hope, is clear: you can certainly use cross-module files in your extensions.